The island is thought to be named after Abraham Rycken,[2] a Dutch settler who moved to Long Island in 1638 and whose descendants owned Rikers Island until 1884, when it was sold to the city for $180,000.[18]

The island was used as a military training ground during the Civil War. The first regiment to use the Island was the 9th New York Infantry, also known as Hawkins’ Zouaves, which arrived there on May 15, 1861. Hawkins’ Zouaves was followed by the 36th New York State Volunteers on June 23, which was followed by the Anderson Zouaves on July 15, 1861. The Anderson Zouaves were commanded by John Lafayette Riker who was related to the owners of the island. The camp of the Anderson Zouaves was named Camp Astor in compliment to millionaire John Jacob Astor Jr. who provided funding for the army, and who appears to have made a significant contribution to the raising of the Anderson Zouaves in particular, with the Astor ladies being credited with the manufacture of the zouave uniforms worn by the recruits of this regiment. Rikers Island was subsequently used by numerous other Civil War regiments, but the name “Camp Astor” was specific to the Anderson Zouaves and did not become a general name for the military encampment on the island. 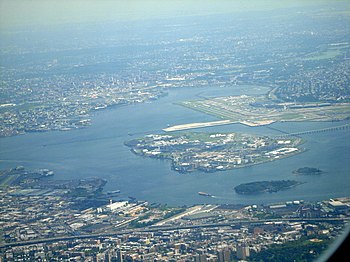 Aerial photo of Rikers Island, seen from the North.LaGuardia Airport and its 4 / 22 runway stretch can also be seen, just 250 feet (76 m) from the island.

In 1883 New York City’s Commission of Charities and Corrections expressed an interest in purchasing the island for use as a work-house. Any such purchase would have to be approved by the state. In January 1884 state senator Frederick S. Gibbs introduced a bill in the state senate authorizing the commission to purchase the island.[19] In May 1884 Governor Grover Cleveland signed a bill authorizing the Commissioner of Charities and Corrections to purchase the island for a sum no greater than $180,000.[20] At the time, the island was within the boundaries of Long Island City, which was located in Queens County, which was not yet part of New York City, and this potential transfer set off squabbling between politicians of Long Island City, Queens County, and New York City.[21] On July 31, 1884, a compromise was agreed to by all three entities, New York City agreed to pay a total of $3,000, to be disbursed as $2,500 to Long Island City and $500 to Queens County.[22] On August 4, 1884, the Commissioner of Charities and Corrections, Jacob Hess, signed a contract purchasing the island from John T. Wilson, a descendant of the Ryker family, for $180,000, $179,000 to Wilson and $1,000 for a title search.[23]

Rikers CO Charged with Rape – has this happened to you?
September 12, 2016

CO gets slashed in face by inmate, will likely sue inmate
July 28, 2016